As someone who writes stories, I am conditioned to find the theme, to dig for the hidden meaning like a dog after whatever lies a foot beneath the backyard grass.

I spend more time searching for it — in books, in interviews, in my own mind — than actually sitting down and writing. But sometimes, you don’t have to search. You don’t even really need to. The theme finds you.

On Friday afternoon, I took Sonny to one of three local parks we regularly visit. We had not been in a while, and on this day it made good sense to go to the closest one. So, we went. 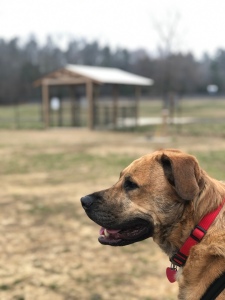 The skies were gray and haunting, like they look just before a tornado. The wind whipped as if it was going to happen. We were a couple of the only ones in the entire park, so I took Sonny to the gated area for dogs twenty-five pounds and heavier. He had the flat acre to himself.

He smelled every square foot, from the dirt to the crabgrass to the crevices between large rocks. He tilted his head one-hundred-eighty degrees each time he heard a St. Clair County cow moo beyond the black fence. He watched birds bolt across the sky and squirrels scamper up trees. He climbed to the peak of an A-frame agility ramp and decided that leaping off was an astute decision. He kicked up the dust of this enormous sandlot and panted for water, which he drank straight from a sweating bottle like a human.

We walked into the baseball park of this city complex, meandering between blue dugouts and batting cages. Friday was Opening Day for college baseball teams, but more importantly, it was the day Atlanta Braves pitchers and catchers reported for spring training. Typically we stop for water at a corner bench just outside one of the big fields, but Sonny pressed on, turning left to cut through a small parking lot. We had never taken this route.

As Sonny stepped past a concrete parking stop, he quickly turned back. Something caught his eye. It was a baseball, and it was resting against the stop. He just stood there and looked, as if he wanted me to pick it up. In the ‘90s, a pre-internet hobby of mine and of others was to search the local dugouts for baseballs, because the more you had in your bag, the less you had to shag. So, I picked it up. 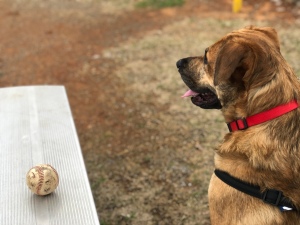 And I’m not quite sure why this felt thematic or important to me. Was it just a ball found by a dog who refuses to chase a football and tennis ball? Was it the fact that we, for the first time in a while, went to this park, the one with the baseball fields, on college baseball’s Opening Day and the first day of Major League spring training? Was it a step back in time of sorts, as if this park in this small town was our own sandlot and our time machine to take us away from clamoring over New Green Deals, abortion, and border security?

I don’t have the answer. The beauty of the day’s simplicity lies in the eyes of the beholder. Most would probably just see it as a man and his dog going for a walk. But to me, it was more. You see, he’s not just a dog or family. He’s a best friend, an ear to bend even though he can’t talk back to me, and a reminder that when many say this tweet-crazed country is destined for doom you can still find peace within it, even if the talking heads tell you how you should feel. That peace lives off the beaten path, between the pines, near the mooing cows and singing swamp frogs, on a patch of flat land that produces memories and nothing more.

Friday was just a dog seeing the world beyond his backyard and finding a baseball, neither of which on the surface seems that special. I kept the baseball anyway.