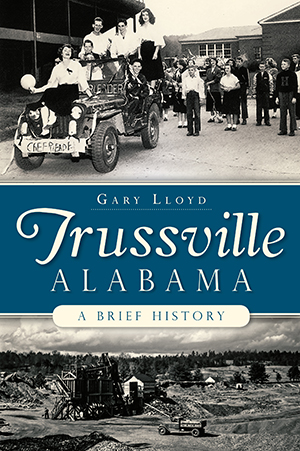 Published in 2014, Gary Lloyd’s first book was “Trussville, Alabama: A Brief History.” Long before Trussville became the commercial hub of northeastern Jefferson County, settlers fell in love with the area’s fertile land and proximity to Alabama’s longest free-flowing river, the Cahaba. In the late 1930s, a New Deal initiative known as the Cahaba Project established nearly three hundred new homes in the city, a community that became a historic treasure. The Trussville Academy opened its doors in 1869 and is the area’s first educational institution. Camp Gertrude Coleman, which opened in 1925, is the third-longest-operating Girl Scouts camp in the nation, remaining open even during the Great Depression and World War II. Join author Gary Lloyd as he recounts the people and events that make Trussville one of the most desirable places to live in Alabama.

Copies are available for purchase through Arcadia Publishing and Amazon.