BIRMINGHAM – In several years, Pelicans will descend on Birmingham.

In an effort to accelerate player development, the team will begin play next season in Erie, Pennsylvania, as the Erie BayHawks, while its permanent home at the Birmingham-Jefferson Convention Complex undergoes renovations. The name and identity of the team in Birmingham will be announced at a later date. The Pelicans organization will engage with the Birmingham community to determine an identity that best represents the city and the region.

“I’m so pleased to welcome the New Orleans Pelicans to the NBA G League’s growing family,” said NBA G League President Malcolm Turner. “The Pelicans join the league at an exciting time: We’re on the brink of 30 teams and are coming off our most productive season to date. I look forward to fans in Birmingham enjoying NBA G League basketball for seasons to come.” 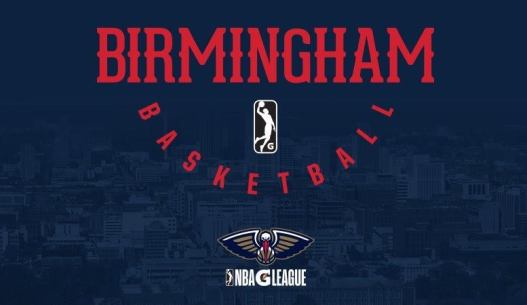 “This is a tremendous day for the Pelicans organization,” said Pelicans owner Gayle Benson. “I’d like to thank the City of Birmingham, Mayor (Randall) Woodfin and Tad Snider of the BJCC for being such fantastic partners in the endeavor. These are exciting times for this region, and we feel so fortunate to be a part of it.”

“We know this has been a lengthy process, but we wanted to ensure that we found the best partner for this endeavor, as we are fully invested in our team and building basketball in the Gulf South,” said Pelicans President Dennis Lauscha. “We’ve done our due diligence and researched markets across the region, and no one matched the interest and investment that the City of Birmingham will provide. Our NBA G League franchise is prepared to move to Birmingham as soon as the infrastructure and resources are in place, and we are willing to wait until renovations to Legacy Arena are complete to ensure we have the best facilities in the entire NBA G League. We are very anxious in becoming an active member of the Birmingham community. Additionally, we are excited to be able to accelerate our commitment to player development and establish our presence in the NBA G League by beginning play next year in Erie. We feel fortunate to be able to keep professional basketball in Erie, a city that has supported the team since 2008.”

“We are so excited to enter the NBA G League with our own exclusive affiliate,” said Pelicans Senior Vice President of Basketball Operations Dell Demps. “As a former coach and general manager in the G League, I fully understand the importance of player development and the significance behind giving players a chance to gain valuable experiences in game situations ones that can’t be replicated in practice or the film room. The opportunity to begin our operations next year in Erie is a great situation for our organization. The infrastructure is already in place, the transition in taking over basketball operations for the BayHawks will be seamless, and it allows us to accelerate our player development program. We’re thrilled that Birmingham will be the permanent home to our NBA G League team and look forward to bringing our brand of basketball and investment to the community. I’d like to thank Mrs. Benson, Dennis Lauscha and Mickey Loomis for their efforts to make this happen and their commitment to providing the resources we need to be successful.”

The Pelicans will partner with the BayHawks’ current management team, led by Owen McCormick and Matt Bresee, to operate the team in Erie. Most recently, the group in Erie has been in partnership with the Atlanta Hawks to host that team’s NBA G League affiliate while its arena in College Park, Georgia, is being completed. Erie has been the home to an NBA G League team since the 2008-09 season.

Legacy Arena will undergo a $123 million renovation and expansion prior to welcoming an NBA G League team. As part of the updates to the building, enhancements to Legacy Arena will include a new façade, new entrances and an expansion that will add a suite level and premium club space.

“We’re thrilled to have the Pelicans coming to Birmingham,” said Woodfin. “We have worked hard to make sure we have the right assets in place so that we’re ready when opportunities come along to make our community an even better place to live. This is good for our residents, it’s good for our economy and it’s a great day for Birmingham.”

“Since opening in 1976, Legacy Arena has been fortunate to enjoy a rich sports history. We look forward to the opportunity to open the next chapter with the announcement that the New Orleans Pelicans organization will make Birmingham the home of its NBA G League team,” said Snider, CEO of Legacy Arena and BJCC. “When renovations to the arena are complete, Birmingham will have a very special venue that we’re confident will be a great facility in which to enjoy a first-class basketball experience.”

The NBA G League is a proven developer of talent. A record 40 percent of NBA players to start the 2018-19 season had NBA G League experience, while 33 players selected in the 2017 NBA Draft played in the NBA G League last season.