The president of the Daphne school’s student government association plays point guard for the Admirals’ basketball team and he’s a strong safety on the football squad. Koby is a member of the 2018 Alabama High School Athletic Association (AHSAA) Student Leadership Group, one of two members chosen to represent the state at a national conference in Indianapolis in July.

The 17-year-old is one of thousands of AHSAA student-athletes who give of themselves to their communities during the summer and throughout the year, using lessons learned at home and as part of prep team sports.

Koby shares his love for basketball by serving as a coach and mentor at camps for players as young as second grade.

Koby also volunteers at two food banks – the Prodisee Pantry and Feeding the Gulf Coast – in the metro Mobile area and has volunteered at a nearby nursing home.

“I wouldn’t call myself a ‘superior volunteer,’” Koby said. “I’ve helped at the food banks, the nursing home, during intramural basketball and I volunteered at an art festival and some other little things. Being so busy, I don’t do them on a weekly basis – just when I have time.”

With Feeding the Gulf Coast, which has offices in Alabama, Mississippi and Florida, Koby said he has worked as a donation collector, standing outside during food drives. “My dad (Roger Koby) does some fundraising events with them,” he said.

Prodisee Pantry is a faith-based non-profit that provides emergency food and disaster relief. According to its website, it has provided assistance to more than “110,000 Baldwin County families facing hardship stemming from job loss, medical expenses, natural disasters and other crises.”

“I’m more hands-on with Prodisee Pantry,” Koby said. “I sort food and have even had days when I load carts and take food to people’s cars.”

Koby said all the students at Bayside are encouraged to share their skills in the community. “The school does a really good job offering opportunities to volunteer, and my parents encourage me to help others,” he said. “I try to be a role model. I want to help and do the right things so younger kids know.”

Playing a team sport also works to help students stay on the right path, Koby said. “I definitely think there’s a family kind of atmosphere that you create with a team,” he said. “The bonds you make with people that are bigger than just hanging out on the weekend. You play together to accomplish something with everybody working together. Even people you might not be friends with – it’s cool how people you’ve never known get attached and grow together.

“Another thing that team sports does is it adds structure. If you have practice in the morning, you can’t just sleep in. Lastly, and one of the biggest things for me, is the leadership you learn. In sports, I’ve always wanted to be a leader. It has helped me to step up when I need to and develop my leadership skills.” 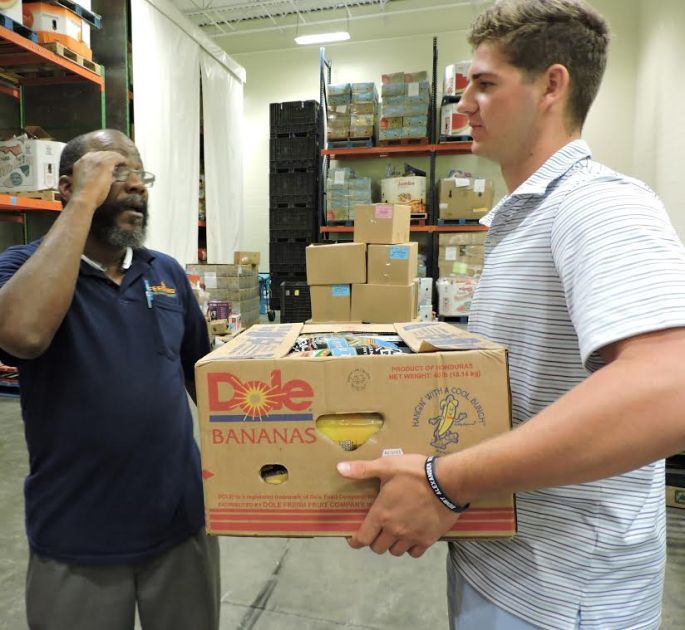 Volunteer Sam Koby of Bayside Academy, right, gets instructions from Ron Henderson, the reclamation coordinator for Feeding the Gulf Coast, on unloading an incoming box of groceries that will be distributed to the needy in Mobile, Alabama . (AHSAA photo)