Ray of Hope is a book that will help people.

Every copy sold goes directly to the Ray of Hope Wheelchair Ramps ministry in Pace, Florida.

I wanted to provide you a chapter from the book, one of my favorite interviews out of the twenty-five or so I recorded. It was recorded in November 2017 with a woman not quite 102 years old.

I have recorded and transcribed thousands of interviews. I have heard so many different things. I have heard football coaches and linebackers talk about defining stops on third down. I have heard city councilmen filibuster about tight budgets and elections. I have spoken to a teenager who had beaten cancer twice, but I didn’t get to interview him after his third bout. I have talked with a woman who drove more than one hundred people home in a snowstorm, and another woman who lost her wedding ring in a tornado. I have recorded interviews with school principals about inspiring teachers, lawmen about hardened criminals, and rich celebrities about themselves.

I could go on and on, but I’ll stop there. Just after Thanksgiving in 2017, I recorded the interview that topped them all.

Imogene’s family was one of the first to settle in Pensacola, Florida, and she worked the late shift for seventeen years at Baptist Hospital. She could get everywhere by walking. She told me about the hurricanes that have affected Pensacola, and the names of people in her neighborhood in the 1920s. That gave me pause. 1920s?

“I didn’t know I’d every reach this point in life, but I’m still here,” she softly told me.

I asked Imogene, as politely as I could, how old she was. She said she was one-hundred-one, and would be one-hundred-two in February 2018. Her father was born in 1889.

“I know Pensacola real well,” she said. “I love talking to people because I am a native here. We had all the names that meant something.”

She told me that she got her wheelchair ramp just before summer in 2016. A friend had received a ramp from Ray of Hope, so that was how she connected with the group. She said her daughter lives with her, to help her with day-to-day activities. She is not in a wheelchair, but struggles to maintain her balance. She uses a cane while her daughter helps her down the ramp.

“When you get to be one-hundred-one years old, and trying to get around, a ramp does help,” Imogene said. “It is a wonderful help in getting in and out of the house.”

She said that Ray of Hope had it built in “rapid time,” completed just after lunch.

This is precisely where her impassioned speech began. I asked her about Ray of Hope performing this selfless act of kindness for her, and what that means to her in a time dominated by political and crime-ridden headlines.

“The whole world has gone crazy,” she said.

The newspaper story sticking in her mind that day was already a month old, reported in October 2017, but it was so heinous that she decided to tell me about it. A three-hundred-pound woman living in Pensacola, the same town she has called home for most of her life, was charged with murder by authorities for allegedly sitting on her young cousin as punishment for misbehaving, causing the girl to die of cardiac arrest. Imogene shared the story with her granddaughter, who lives in Atlanta.

“What’s the matter with these people?” she asked.

She said that every time the newspaper comes to her house, she cringes. She takes no chances and stays home at night. You don’t know what or who you will run into anymore, she said.

A short pause gave me just enough time to interject a question. I asked Imogene if today’s negativity makes what Ray of Hope does that much more impressive, that much more of a blessing. She answered by telling me about her late shift working at the hospital, how a guard used to walk her and other nurses to their cars, just to be safe.

It is hard to keep people on track when you are interviewing them. I learned, pretty quickly, that is a completely another task to do so with someone who is one-hundred-one years old. So, I told Imogene that I had no more questions, that I just enjoy listening to people’s stories.

She went on to tell me, again, that she knew Pensacola well enough to walk anywhere she wanted. All of her relatives lived within walking distance of her growing up. She told me a new jail was being constructed nearby, something she believes won’t be big enough to keep all the bad people running around the streets these days. She again brought up the article she read about the woman sitting on and killing her little cousin.

“I said, ‘Dear God, what in the world is happening to people?’ Lucifer is loose, and is he busy.”

I again took this opportunity to mention the positivity that Ray of Hope provides to her section of the world, that even though many things seem dim and grim, that group is doing right, that it is on a mission from God. She agreed.

She briefly talks about Ray of Hope again, stating that she has a tremendous horror of falling, and will not attempt to use the ramp when it is wet. She was then back to her speech, saying they — who is they? — built to the east side of Escambia Bay and to the north of her. The Gulf of Mexico was to the south, and commercialism is now moving west.

“Every little spot you see something going up,” she said.

I tell her that I did think of another question, about the founder of Ray of Hope, Jimmy Ray. I asked her what her thoughts were on someone helping others the way he did. She told me that she had a cousin who lived on Garden Street, and the property right by her house was sold, and now she is worried about what will be put up there.

“We don’t have any laws here that protect us from people just putting up anything,” Imogene said.

How do you tell a one-hundred-one-year-old woman that she is not answering your questions, that she is not helping? You can’t. You just listen, listen and listen. You remain patient through all the extraneous information and hope for a nugget of good information. I tried again with a pointed question. I asked if Ray of Hope building more than five hundred wheelchair ramps surprised her. She answered about laws protecting property.

“We have to have some,” she said. “You can’t give Mother Nature away.”

I said “Yes, ma’am,” and thanked her for her time. My tape recorder showed that we had talked more than twenty-two minutes. I told her I couldn’t think of anything else to ask. She paused before saying that the volunteers had two young girls with them helping build her ramp.

“If we had more people doing things like that, it would begin to help a little bit,” she said.

The nugget of good information finally appeared. She went from focusing on the negativity in the world to the good stuff. She told me that she reads the newspaper every day, which I already knew. This time, however, she said that the first thing she reads are the obituaries, to check for people she knows “who have gone to the great, wonderful beyond.” She said she hopes that there are some people left on this earth who can rebuild what’s left of a broken world, like Ray of Hope.

“People don’t know what work is,” Imogene said. That’s what we’ve got to look at. We have to have some better people working on things and trying to get people to understand how to help people. It’s sickening to think about the things that are going on.”

At this point, after twenty-five minutes, I can tell I’m getting through to her. I tell Imogene that I’m trying to do my part to put out some good stories about Ray of Hope, to bring some positivity to her corner of the world.

“Let’s hope it’ll come soon, because every day I find new things that are happening,” she said.

Imogene went back in time in her mind. She grew up during the Great Depression, and a family member had a restaurant in downtown Pensacola. Leftover food was taken home and divided amongst relatives. An aunt had a small farm in Cantonment, Florida, and she would fill her car to its roof with vegetables for the family. Seeing those things as a girl helped Imogene do nice things for others as she got older. She would have children pick blackberries and bring them to her house. She made them blackberry cobbler, which they would eat under the trees.

“Everybody helped everybody,” she said. “People were willing to help each other.”

She said simple acts such as those kept people together, kept them doing something worthwhile. She said that today, people want to come to the United States because they believe the sidewalks are made of gold.

“Anything worth having is worth working for,” she said. “But people don’t see that.”

I told Imogene that I planned to have the book done by spring or summer of 2018, and that I would surely drive to the Pensacola area with a box of books for people. I told her that I would let her know when I was coming.

“Well, let’s hope we don’t run out of space before that happens because they’re piling in here now,” she said, back on her impassioned plea for city growth to slow down just a little bit.

Then, one more nugget.

“There are people that are trying to do the right thing to help each other,” she said. “There are good people, if we can just find them.”

I thank her one final time, especially for that last comment, and, without fail, Imogene was back talking about how things used to be, and how much different society is today.

Get Ray of Hope here. 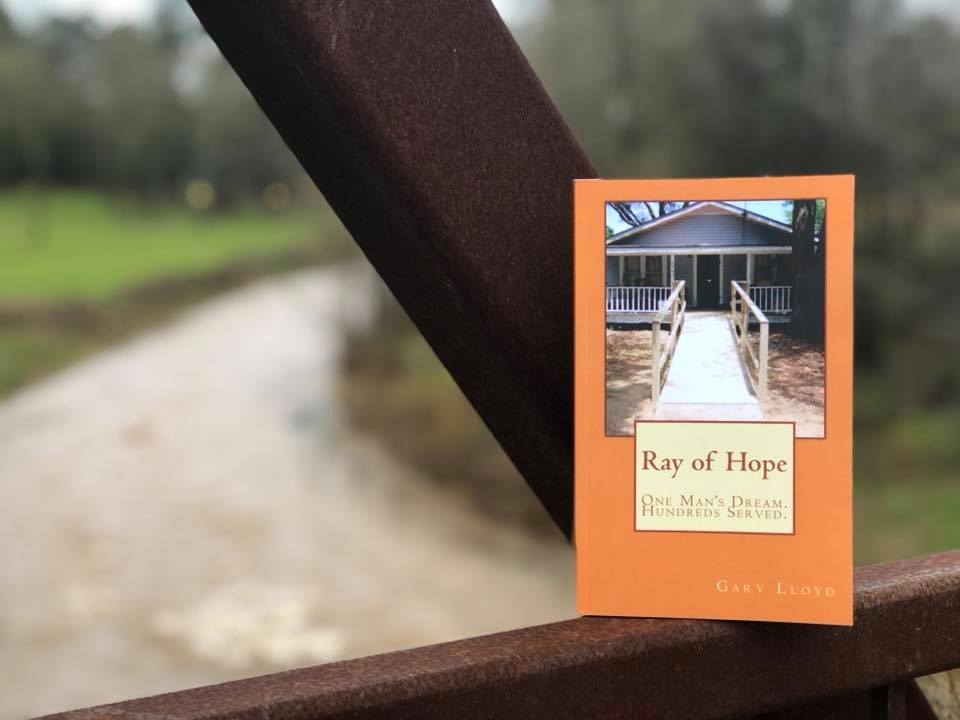